(damn right she is)

Hey, I’m Kathy! I’m a natural born boss and have a deep affinity for all things boss-related. I even named my very first Mac computer “Boss” in 2002(!) and we’ve been building my empire ever since. Boss and I, we’ve dabbled in all sorts of avocations – from sales and marketing to graphics and web design to project management and HR.

Random, I know, but my early career consisted of a series of heart-led chapters that got me closer to understanding how I could best be of service to other bosses and how to make the biggest impact. In ech new role I learned something that got me to where I wanted to be.

And now? I’m the Head Boss In Charge of my very own empire (and still bossy AF).

Maybe when you hear the word “bossy,” you imagine a 3-year-old child endeavoring to rule the sandbox, or worse, that stereotypical success-driven female that people love to hate.

Thanks, but no thanks. I’d like to write a different story.

And that’s what my past 15 years have been all about. Unearthing the secrets to being a bossy-ass boss that gets it done without throwing sand. I’ve learned a thing or two about stepping into my power and owning it, minus the lame stereotypes, and with enough grit to make some damn big waves.

How’d I do it? Easy. I followed my curiosity.

I simply followed the things that lit me up, even if they didn’t seem to go together, and little by little got to where I knew I’d eventually end up

A Boss, A Leader, A Visionary.

Are you right where you want to be?

No? I have strategy for that. Lots of it, actually.

I help the established solo/micropreneur take her existing business and crank it up to the place she’s dreamed about by tapping into the power of bossy and claiming her rightful place as Head-Boss-In-Charge of her very own empire.

Because I believe that a booming business changes lives, changes communities, and eventually, changes the world for the better. Can you imagine how much impact you could make if your business was truly thriving?

Aside from the fact that buddying up to a business growth strategist is just plain smart, let’s find out if you really need my help. Indulge me by taking my short (and highly scientific) quiz to determine the level of your need.

Want to know how I can help you in particular? Set up a consultation call for some Strategic Bossery and… 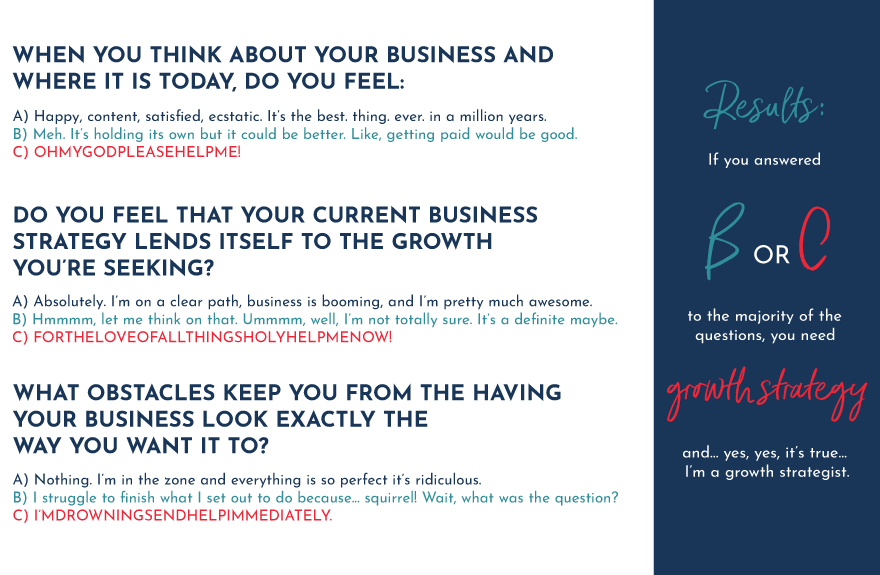 Want to know how I can help you in particular? Set up a consultation call for some Strategic Bossery.
Let's Talk Growth